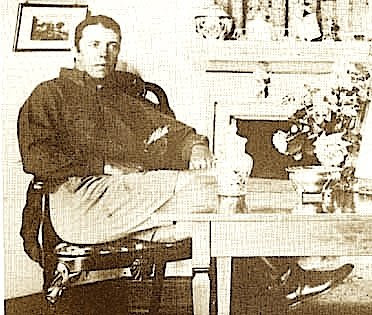 SPORT / BIG GAME HUNTING / EAST AFRICA
Bror von Blixen-Finecke (1886-1946) was a good writer and a charismatic Swedish nobleman. Hubby of Karen "I had a farm in Africa" Blixen, pal of Denis Finch - Hatton, Beryl Markham etc., + guide to Euro royals inc the Pragger Wagger and others. A great shot, liked a drink, v charming, a white hunter greatly admired and chased by women. His biography "The Man Whom Women Loved" written by his godson, Ulf Aschan came out in 1987. According to aviatrix and former lover Beryl Markham, "Bror was the toughest, most durable white hunter ever to snicker at the fanfare of safari or to shoot a charging buffalo between the eyes while debating whether his sundown drink would be gin or whiskey ...The mould has been broken." In the Out of Africa movie Klaus Maria Brandauer, brilliant German actor, played him. Bror Blixen's bunch segue into Kenya's Happy Valley set and much later beautiful person Peter Beard.

The most elusive book coming out of the earlier period is 'Vertical Land' by Comte de Janze (Duckworth 1928) -- quite a sleeper, had it twice, never in jacket. No copies on web at present, worth a ton, but not much more unless in a jacket. The Comte was married to American heiress Alice de Trafford (played memorably by Sarah Miles in 'White Mischief') he later became a racing driver and is said to have moved in literary circles in Paris and formed friendships with Marcel Proust, Maurice Barrès and Anna de Noailles. Trivia--their daughter Nolwen married art historian Kenneth Clark (Lord Clark of Civilization) and was, presumably, the mother of diarist and politician Alan Clark, another great lover of women.

VALUE? Bror's 'African Hunter' is a big game book, but not in the customary leopard skin covers and not really one for the trophy room. A hunting specialist was selling a fine in jacket copy for $1000 but jacketless copies can be had at a shade less than $200. The $1K one is no longer available and may have sold. The 1938 Knopf edition was relatively common and could be had for $100 sans jacket. Jacketed copies are, however, hard to find.

Outlook. This is a reprise of a posting in late 2006 and the book appears to have moved on by about 10% with the US ed moving on at considerably more. Unjacketed copies of the Knopf 1938 first and the Cassell 1937 first sit there at between $200 and $280, no sign of a jacketed copy. A 'first thus' of the 1986 Capstick reprint series St. Martin's 100th anniversary (of Bror's Birth) edition fetches $60+ in nice state. The great white hunter thing may be a getting a little passé but there is a growing page ( (White Hunter) on the matter at Wikipedia--among other things it reveals that a character named Wilson, portrayed as a "white hunter" in Hemingway's safari story, 'The Short Happy Life of Francis Macomber' is said to have been based on Hem's own guides, Philip Percival and Bror Blixen. Le Comte de Janzé's 'Vertical Land' is still unlisted, although copies may well have been listed and sold, it is not impossibly scarce - only an ebook at £1.60 is available. I will mark that book at a hundred minimum next time I see it.
Posted by Bookride at 8/10/2008

Thanks for this noble Bookrider---Comte de Janze wrote another book for Duckworth in 1929 'Tarred with the same Brush'--has anybody ever seen it or know what it is about??