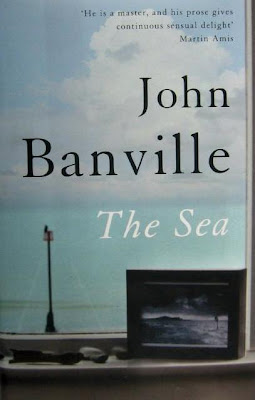 MODERN FIRST EDITION
Classic Booker prize fodder, romped away with the prize in 2005. One of the great prose stylists of our time who also turns in very decent detective fiction under the pseudonym Benjamin Black. Julian Barnes did this under the name Dan Kavanagh and notably one of the MacSpaunday poets Cecil Day Lewis wrote several highly collectable thrillers under the name Nicolas Blake. 'The Sea' concerns an art critic, a not especially likeable character, returning to the seaside village where he once spent a childhood holiday, he is both escaping from the recent loss of his wife and confronting a distant trauma. Critics have called his prose 'hauntingly beautiful' and the book 'an extraordinary meditation on identity and remembrance. Utterly compelling, profoundly moving and illuminating, it is unquestionably one of the finest works yet from a sublime master of language.' Don de Lillo wrote 'Banville writes a dangerous and clear-running prose and has a grim gift for seeing people's souls.'

This is not the most valuable of Banville's works by a long chalk - 'Long Lankin' (1970) and 'Nightspawn' (1970) can command over £300 each. However the book is on the rise, as are many Booker winners, with a solid and growing bunch of collectors of this genre. There are less of them than, say, collectors of the New Naturalist series but many of them not only collect winners but also shortlisted books and many are frightfully well off. Some of these runners up are are highly elusive and worth many hundreds of sovereigns--Terence Wheeler 'The Conjunction' (1969) Gordon Williams 'From Scenes Like These' (1969) Penelope Fitzgerald 'The Bookshop' (1977) and Elizabeth Mavor 'The Green Equinox' (1973.) Patrick White, John Fowles and John Le Carre have refused to have their books entered for it, John Berger gave half his prize money to the Black Panthers. One winner- J.G. Farrell -denounced the prize from the pulpit, and, disgracefully, the overtalented Martin Amis has never won it, while the unexceptionable Midnight's Children has become Booker of Booker of Bookers.

VALUE? It is said that 3500 copies were printed, many probably went to libraries but it is still not scarce. Fine copies of the first can be had for £40, signed copies at twice that. A limited edition of 56 signed copies in blue cloth with beige paper labels was put together by Irish literature specialist Joe McCann and can command fancy prices like $800. Outlook? Likely to be good, Banville is Irish which always helps, he is limbering up to be a grand old man of letters, he has fiercely loyal followers and you can get invest in him for as little as £40. His signature is not scarce but signed works by him tend to be desirable. His Benjamin Black books are also worth a punt--he tends to sign these 'B. Black.'
Posted by Bookride at 8/08/2008

John Banville proves a master stylist as he describes an angry widower going back to his Irish village only to confront memories from the past. The ghost of his dead wife never shows, ironically, but the past eventually reveals a disturbing story of secret lovers and doomed children. Banville avoids all the cliches, elevating a sordid tale to the level of tragedy through vivid prose that advances the art of fiction significantly.