MODERN FIRST EDITION
You want the first edition, first issue (with the initial "I" on page 11 'dropped below the line' i.e. not correctly aligned). You also need the preferred binding, with the stamping on the front cover away from the top edge and complete and intact (unbroken.) If you have these and a clean copy in a real nice jacket, well over $5000 is achievable, the second state about half that. Apart from a troubled sojourn in Hollywood writing screenplays, Faulkner spent most of his writing life in Oxford, Mississippi. In later life he was a serious drinker - sometimes drunker 'than a 100 Indians dancing in a cornfield' as Capote puts it. He went to Paris in the 1920s but was never part of the expat crowd like Hemingway. This novel, because it is told from multiple view points in a stream of consciousness style is often said to be influenced by Cubism.

His acquaintance with Cubism is well documented. While in Paris in 1925 he stayed near the Luxembourg museum where he saw many contemporary paintings of Manet, Picasso, Matisse, Braque and Cezanne. The critic Panthea Reid Broughton claims that 'As I Lay Dying' is the 'quintessential cubist novel' with its 'repeating geometric designs -- lines and circles, verticals and horizontals -- Faulkner actually facets, like a cubist painting, the design of this book. That is why it is so difficult to speak of theme in As I Lay Dying. Here we have a work of fiction that comes remarkably close to being an exercise in pure design...'

The title comes from Book XI of Homer's The Odyssey, where Agamemnon speaks to Odysseus: "As I lay dying, the woman with the dog's eyes would not close my eyes as I descended into Hades." It is also notable for its varying chapter lengths; the shortest chapter in the book consists of just five words ("My mother is a fish".) Faulkner wrote the novel in six weeks without changes on a table fashioned from a wheelbarrow while working the 6PM-6AM shift at a coal-fired power plant. The stuff of legends.

OUTLOOK. Reasonable, Faulkner is still taught and is a big part of many American literature courses. His prose style is much admired and he is a giant in the literature of the South. His books are often good looking and are highly uncommon signed (apart from the signed limited editions.) They appear to be holding their own, a decent first state copy made just over $10,000 ay auction in 2007. The British edition of Pylon (1935, see below) is especially handsome in its jacket and can fetch over $1000. The fact that he won the Nobel Prize in 1949 also helps, although a lot of mediocre and forgettable writers have also won the prize. 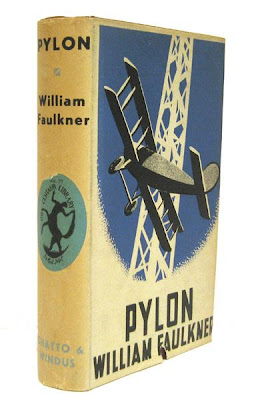 I would love to let you know about upcoming events at the Center for Book Arts. Please let me know where I could email you that information – thanks very much!

The book was fascinating, the characters were rich and ugly, and Faulkner's innovative style is unforgettable.