Where do you get these books? 4 10. Book Towns. Where books go to die, although bargains have been known and occasionally the shops there get amazing books thrust upon them. They are also delightful places to hang out - as the photos show you can look at the books in the open air; however you have to really want to read them as outdoors a book can rapidly become what cataloguers call a 'reading copy only.'

The problem with booktowns is that they are not sourced in the way that normal second hand bookshops are-- local bookshops get their books from deceased estates, people who are moving or downsizing and books brought into the shop. If the propietor is a bit entrepreneurial he or she will go to auctions, visit other shops and generally be involved in running books to earth. I am not totally sure where booktowns get their books but they tend to be a lot less interesting than a local shop and often priced with a much heavier hand. It is said that many bookshops that have closed down have sold their stock to book towns, the trouble is that they have usually had a sale first. Occasionally we tell people with unambitious books or those that are too far away to collect, to drive them over to a booktown - at least there are plenty of potential buyers. No book scout would name these places as a source, but if they end up there they have to box clever before they find a book they can sell at a profit. At Wigtown, a beautifully situated place and fun to hang out in, I was in mild despair-- every book seemed to be the right price or 50% over that: lateral thinking was required -- look for unique and overlooked items- eventually I ran across a bunch of non Peter Pan J.M. Barrie books stroppily priced at a fiver each, however each carried a Simeon Solomon bookplate. I sold each one at £50 catalogued thus:

Anonymous bookplate designed by Simeon Solomon with his characteristic S upon S monogram. Engraved by S. Wain it shows two Pre-Raphaelite looking women, one seated by a tree reading an old book, the other affixing a banner to the tree which bears the legend ‘content ailleurs’ 2 banners are already affixed with the words ‘labor’ and ‘theoria.’. Attractive and highly uncommon item in vg condition measuring 3” by 4 1/2”.

Book towns have their own site I.O.B. - International Organisation of Book Towns and recognise these towns - Bredevoort (NL) Fjærland (NO) Hay-on-Wye (GB) KampungBuku (MY) Montereggio (IT) Pennsylvania (US) Redu (BE) Sedbergh (GB) St-Pierre-de-Clages (CH) Sysmä (FI) Tvedestrand (NO) Wigtown (GB) Wünsdorf-Waldstadt (DE). Wikipedia lists a whole lot more. It is good to see that the love of books, bookshops and the general unfocussed sentimentality about the book itself is not just a British peculiarity. I have been to three book towns, the best being Hay-on-Wye (or Way on High as Driffield used to call it) - all glories to its King, Richard Booth, probably the most famous book dealer in the universe. 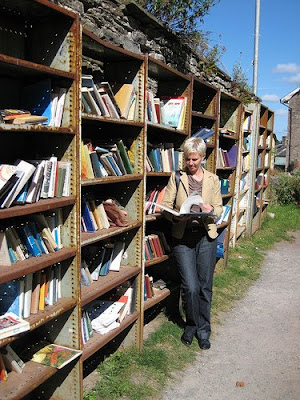 Wigtown was not unamusing but there were large book rooms there for which you would be hard pressed to pay £50 the lot. Redu is not without interest, but Martin Stone reported that it was filled with glowering soixante huitards and bargains are almost unknown. It was in book towns that I first spotted people selling library books -a thing almost unknown thirty years back, but now some shops have little else. Although I still regard them with suspicion and distaste I have now learned that you can actually sell them (especially on the web) and it is said the the Japanese regard them with favour (something about a book being worthwhile if it was good enough to be in a library.) Fortunes have been made from ex library books but that's another story... To be continued with charity shops, thrift shops, skips, stately homes and minicab offices...
Posted by Bookride at 8/05/2008

I remember visiting Hay -on - Wye,at customers recomadations. I can only say it was one of the low points of my life - i didn't realise there were so many unsellable,tatty books in existance ! Thousands of volumes of Third World Economics,biographies of every pre-war local council leader.etc.
Even the stuff locked in glass cabinets was routine,but at silly price's ,to stop it selling ,i assume.
Quite depressing.
I think of them as a tourist attraction,along with living museums.

Perhaps you could add a sub catatory to the bookfair section,namely the
" Booksale for Charity " Often a church who has a annual clearout of donated books,some even charge for admission,along with a chance to convert & repent ye sins.
Fun places to check out the local bookdealers who mysterious advertise in the local rag,under the guise of " private collecter seeks..."
Of course these fairs are 99% full of Christian biographies and the 1% left have been googled and priced at £10.00 !

Speaking of Rogue dealers,what about a piece on the underhand methods used against local bookstops,like hiding their biz cards inside the bookshop,with little notes saying " do not sell to this bookshop -i'll pay you more " and hanging about outside and acosting sellers before entering the shop.Driff's, i think ,said something about the local rabble who would stake out a shop,until it closed down.