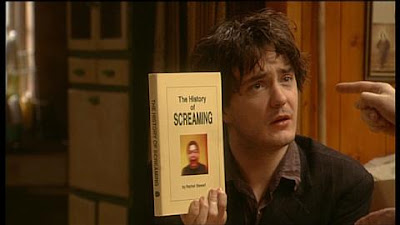 BASTARDS WITH BOOKSHOPS or Look Back in Anger.

Shopkeepers are an ill-tempered bunch and booksellers are no exception. Booksellers are often on a very short fuse and can become incandescent with rage, inconsolable and beyond the reach of practitioners of anger management, Buddhist monks and preachers of peace, love and understanding. Bernard Black in 'Black Books' is said to be based on an amalgamation of real life characters- mostly high handed, cranky booksellers.

A bookseller on Route 1 in Porstmouth NH recently got in the papers yet again - he makes Bernard look like John Inman ('Are you Being Served?')--he charges a $5 browsing fee and has been known to knock out customers who venture in his shop without permission. I had heard of him over the years as an example of a dealer who had seriously lost the plot and have always been amazed that he stays in business. He has just been busted for writing bad cheques and the local paper chronicles his misdemeanours thus:-

"Past police calls to the Antiquarian book store have involved weapons, assaults and arrests, including the following:

* On April 2, 2005, police were called to the bookstore by a man who reported he was assaulted. According to police records, the customer reported Wakefield "tried to hit him with the door to the store."

* In April 1999, Wakefield was arrested on a charge of simple assault.

* On April 27, 1995, Dale Shaw of Rye went to the store and after being told there was a $5 fee to browse, an argument ensued, according to court records. A court affidavit said Wakefield called the customer a (expletive) retard," before hitting him with a metal pipe, scraping and bruising his arm. In 1995, Wakefield told the Herald he was defending himself from a robbery attempt and Shaw shoved him. Shaw was not charged by police with any crime.

* Hampstead auto parts dealer Patrick Murphy told the Herald in 1995 that he went to browse in the bookstore where Wakefield started an argument and called him "an AIDS infected" (expletive).

* In March 1994, Richard Wentz of Rye was arrested for criminal threatening, according to police records, for showing a handgun at the bookstore after getting into a dispute with Wakefield.

* In 1998, Wakefield was convicted of criminal threatening and assault against a Merrimack man for shoving and threatening him with a pipe.

* In 1988, Wakefield was found not guilty of pulling a gun on a customer.

It would be a foolhardy punter who having effected an entrance to the shop, paid the $5 browsing charge (only time I have ever heard of this in world bookselling) would then start stealing books under the eyes of an over vigilant man whose photo reveals him to be built like a brick shithouse. These chaps are always frightened that their invariably mediocre stock is going to be plundered. At a shop in San Jose, CA which I shall refer to as R+W, and is happily no longer, the proprietor was so paranoid he would not allow men with untucked in shirts in the shop lest they conceal a book, had a notice saying "Don't read the magazines unless you're going to buy", followed people into the loo in case theye were going to stuff books in their clothes and priced many Book Club books as if they were true firsts at hundreds of dollars in a red angrily applied crayon. This shop with its enormous, overpriced, stinkingly bad condition books was by common consent 'the worst bookshop in the universe' and was discussed on Google Groups in the early 2000s. to be continued...
Posted by Bookride at 8/28/2008

Ps. I'm making some headway with the slideshow of Carrera...

Nice link thanks Soren--man that Moran can tell 'em, punchline at about 100 seconds, no laughter (except here!) N

R&W was not the world's worst bookstore. Surely this monster in Wakefield should have the honour - how many shops consistently attack customers with a lead pipe!?