where do you get these books? 5 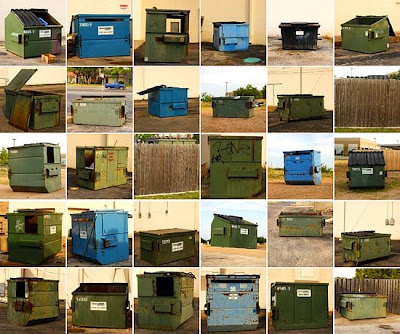 11. Skips, dumpsters, recycling and rubbish tips. Not highly recommended but finds are known and there are golden legends attached to skips full of books. About 20 years ago in Stamford Hill, London, a skip (UK word for 'dumpster' and a nicer word imho) filled with rare Judaica was found by a lucky and clued up passer by. Some builders doing up a house had unceremoniously dumped all the books and documents in a big yellow skip outside the place - some of the books were of great antiquity. Legend has it that he filled a van with the material and took it to a West End auction house where it made half a million pounds. It's always half a million in these stories. By the way pics above, of a myriad of U.S. dumpsters, are by Trent Nelson -a charming photo essay on the The Dumpsters of San Angelo. For which much thanks. Below is a British skip--they are invariably this shape and often painted yellow and expensive to hire. 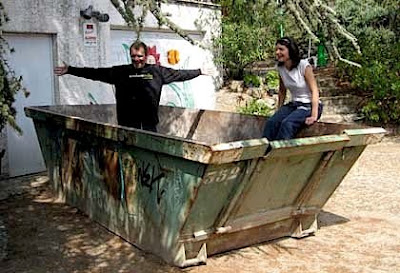 Another great dumpster legend centres around bookish Bell Street in Marylebone, London. About 25 years ago a defunct bookshop had been taken over by the council and the books were being chucked into a series of skips outside. People assumed they were wothless leftovers until some dealers started looking at the stuff and realised there were fabulous and pricey books in there - probably from some hidden backroom. When they started carting them away in boxes the council workers got very stroppy and a fight almost broke out. During the ensuing standoff one bookseller had the bright idea of giving the workers a hundred quid (about $300 at the time.) This was accepted with delight after which they could take anything they liked. Although at least one skip had been driven away the dealers had a field day and celebrations went on long into the night. To be continued with the story of the cycling dumpster diver of Santa Cruz, Frank Kermode's great loss and the curious skip of Sackville Street...
Posted by Bookride at 8/14/2008

Nothing to do with bookselling, but there was a famous incident some years ago after San Francisco's spiffy new main public library opened, with miles less book space than the old one, a fact discovered when some passerby found tens of thousands of volumes in their dumpster.

Thanks Fnarf--kind of thing that would send Nicholson Baker mental, he got very worked up about library filing cards but dumspters full of books...one wonders from a dealers point of view if there was anything valuable in there. Never forget the enemies of books are --fire, water, children and librarians. N

My fave dumpster story involves movie memorabilia. Seems National Screen, who used to handle most of the poster and promo work were shutting down in a Southern California town. The local movie buffs found out and proceeded to the dumpster where they began filling their cars up with all kinds of goodies. That is, until a secretary spotted what they were doing and phoned the police. She even blocked the parking lot and refused to let them leave until they emptied their cars back into the dumpster.
They snuck back later that night and discovered a security guard standing next to the dumpster.