Is there anyone anywhere today, I sometimes wonder, who had the opportunities which were mine, during three score and ten years of my adult life, to enjoy wonderful wines, the likes of which the post-wars generations will never know, and the privilege to enjoy them with such wonderful friends? I doubt it.

One of my oldest friends- he was born in 1847- was Sir James Agg-Gardner, a little man and a great lover of wine…he was one of a few friends who lunched with me at my old Mark Lane headquarters, in 1918, to celebrate my return to civilian life.* There were still, on that day, four magnums of Cockburns 1847 in the cellar; we had one of them and it really was magnificent! We were on the eve of a General Election and we all drank good luck to Sir James in the wine of his own vintage. I promised him, somewhat rashly, another magnum of 1847 Cockburn, should he be re-elected. He was re-elected of course, not only that year, but twice again 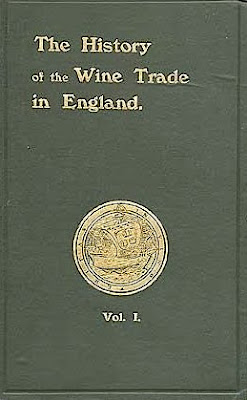 during the next twelve months: it took three elections in two years to get a working majority, and this was why and how my last three magnums of Cockburn 1847 went in two years! No regrets: they were at their best and could not possibly have been any better had they been kept any longer.

... I had the good fortune to hear of a small parcel of Chateau Lafite 1870, in 1935, tasted the wine and found it still very good, old as it was: it was not château bottled, but bottled at Leith, in Scotch bottles, with first-class corks. So I bought it for the Saintsbury Club, of which I was Cellarer then and during the first thirty years of the Club’s existence. I put aside a dozen bottles in the hope that the Lafite and Ian (Campbell) would celebrate their eightieth birthday together, which they did, in 1950, at the Vintners’ Hall.

A much younger friend of mine, Eustace Hoare- he was born in 1899, a great claret year!- was the most charming host imaginable. He was also a great claret lover, and his old Eton mentor, C. M. Wells, Charles Walter Berry, Vyvyan Holland, myself and other claret lovers, met at Eustace’s hospitable board on many happy occasions; we greatly enjoyed fine fare and the finest clarets of 1899 and 1900, as well as each other’s company, of course, but we always failed to agree which was the better of those two great claret years, reserving our final judgement until we had had another ‘sitting’!...

How grateful I am to have still with me, on my shelves, so many old friends, the books which I have been collecting all my life. There are, I know, many bibliophiles who have a far greater number of books that I have, some of them rarer and more valuable than any I have, but I cannot imagine anybody having assembled a more representative collection of books of wine interest*, not only books dealing exclusively with viticulture and wine-making, but others in which wine is considered from the moral, social, economic, and medical angles. This, although the Bible cannot be called a ‘wine book’, I did not hesitate to buy, when I had the chance to do so, a beautiful Folio of Gutenberg’s Bible, printed at Mainz, between 1450 and 1455, with Isaiah’s description of the planting of a vineyard.

The two oldest friends on my shelves have been with me for over sixty years, through two world wars and many vicissitudes: I only paid a guinea for each of them and each is worth at least £50 today. One is a little book of eight leaves in full calf binding, but there were only seven leaves in a blue paper dust cover when I bought it from Pickering and Chatto, in 1904: I had the missing first leaf added in facsimile from the British Museum copy. It is the earliest of all books ever printed that deals exclusively with wine: its title is De vino et eius proprietate; its author is unknown, but I am as sure as one can be without documentary evidence that it was written by Jerome Emser: it was first published, in 1478, in German, before being translated in Latin. My other old friend is a perfect copy of Andreas Bacci’s De Naturali Vinorum Historia, printed in Rome in 1596, a full hundred years later than his little brother; I bought it from Smith, an odd antiquarian bookseller of Brighton, one of those rare bargains that gladden the heart of a bibliophile.

One of the earlier post-War I books which I treasure, as I do the memory of Hugh Cecil Lea, who gave it to me in 1920 as a Christmas present, is William Turner’s A new Boke of the nature and properties of all Wines that are commonlye used here in England. My copy is a perfect copy; it came from the Huth Library and is one of five known copies.

There were comparatively few books written and published before the seventeenth century that dealt exclusively with wine, but there were many books on agriculture in general in which an important place was given to viticulture and wine-making, and many of them are

on my shelves. The finest and oldest of them is the first edition of Peter Crescenz’s Opus Ruralium Commodorum, printed in Ausbourg, in 1471, which I bought from Maggs Brothers, forty years ago, for £280; a beautiful copy in its original pigskin binding, with seven embossed brass pieces at seven of the corners, and one in the centre of the front cover…

Arnaldus de Villanova’s Tractatus de Vinis, and similar books written by the doctors of the School of Salernes, deal with wine in a pseudo-scientific fashion, and are interesting as such: one German doctor, for instance, in his Regimen Sanitatis printed at Strasbourg, in 1513, recommends a draught of wine when having a bath, adding that the Queen of England, Elizabeth, always had one, and there is a woodcut on the title page showing the queen, with her crown on her head, sitting in a great wooden tub and her doctor handing a draught of wine to her!

Fathers of the Church and moralists of old have also written a great deal about the use, more especially the abuse, of wine, and I have many of their writings, none more consoling than the assurance given in one of those books that you may happen to be drunk and be perfectly blameless, that is if you have been given bad wine: you were drugged, not drunk!
Posted by Bookride at 4/28/2010

Thanks for your kind comment I was thinking it might have something to do with the Tesco club...

though their booze a world away from my wine list, which is basically what the Co-op has on offer.

'My copy is a perfect copy; it came from the Huth Library and is one of five known copies.'

Just savour the bouquet of self-satisfaction! [Am jealous really]

Thanks for the reference to the Saintsbury Wiki Edwin--I of course knew him as a serious heavily bearded author esp for Notes on a Cellar-Book (1920) but had not realised he had invented the word 'Janeite' for a lover of the books of Jane Austen and also edited the 2 vol 'Minor Caroline Poets of the Caroline Period' - a book that is still wanted.

Boasting is common among collectors (esp fantasy collectors) and is done in the spirit of 'Rejoice with me!'

As for the wine I am told it was weaker in those days...N

Find it difficult to believe that Simon had the means to purchase a 42-line Bible, never, in his lifetime, an inexpensive book. Can anyone confirm the claim from an independent source? "Folio" meaning "leaf", I can see, but otherwise?

You may well be right Monsieur Lapin, the great Bible of Mainz was always very serious money--Hugh Johnson wrote of Simon's library (1950s) 'One day he showed me his one page of a Gutenberg Bible, the first European printing, which lived in a leather folio. The jet black precision of the impression was almost startling; its perfection strangely moving. "Printing was perfect at the start," André said. "It has never been better than this."'

He may have briefly owned the book--my auction records only go back to 1975--and quickly had to sell, as a wine trader he was not always buoyant or he could be exaggerating, even fibbing--or he simply had the leaf ('noble fragment') possibly the page(s) that referred to wine growing...

Clever of you to find that, and so quickly. Sounds like an A Edward Newton "Noble Fragment" leaf, doesn't it? I see that someone has posted a basic census of copies of the Gutenberg Bible on the internet. Even during the Great Depression copies were going for a then hefty price. Arthur Houghton paid £8,000 for a copy of the first volume in 1937.

Do you mind if I reproduce (duly translated) part of your text on André Simon, together with photographs? I think it's a perfect subject for my blog on literary curiosities. If you would like to have a look (it is in Spanish): http://notasparalectorescuriosos.blogspot.com
Thanks in advance.
Elena

Thanks! Here it is: http://notasparalectorescuriosos.blogspot.com/