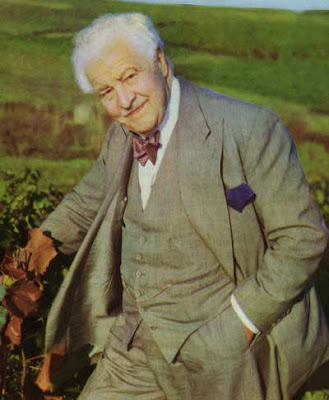 All hail André Simon (1877-1970)  bibliophile, gourmet, wine connoisseur, historian, writer and trader in wine (especially champagne.)  Born in Paris, he came to London in 1902 as the English agent for the champagne house of Pommery and Greno.  Although he lived in England from then onwards, he always remained a French citizen. He wrote over 100 books and pamphlets on wine and food and collected wine books all his life -his personal collection was one of the finest ever assembled. His love of books is described by Hugh Johnson in the foreword to the Holland House facsimile reproduction of his definitive wine bibliography Bibliotheca Vinaria:  "His senses of sight and touch were as well developed as his famous sense of taste.  Books to him were objects of physical attraction.  I remember many occasions when he took book after book from his shelves for me to admire their print, their woodcuts or their bindings."  Simon believed that "a man dies too young if he leaves any wine in his cellar," - only two magnums of claret remained in his personal cellar when he died at the age of ninety-three. There was another stash however, for on what would have been his 100th birthday, 28 February 1977, 400 guests at the Savoy Hotel in London drank to his memory in claret he had left for the occasion: Chateau Latour 1945.

I found this article by him in Wine & Food of Winter 1966 - a magazine he had founded with the great Corvine A.J.A Symons in 1932. It does not appear anywhere on the web but I have not produced it quite in its entirety for copyright reasons- cutting out a few longueurs, deviations etc., I will add some footnotes later. For the moment it is worth noting that this is a book collector so involved with wine that he bought the Gutenberg Bible (current value surely $20,000, 000 or more) because it contains a description in Isaiah of the planting of a vineyard. This is a bit like a collector of tennis books buying a Shakespeare First Folio because the bard mentions the game in Hamlet, Much Ado about Nothing and Heny the Fifth ('When we have match'd our rackets to these balls./We will, in France, by God's grace, play a set ...) His library would have been the kind of collection a dealer could retire on and follow the good life -as defined by Andre Simon.
Posted by Bookride at 4/28/2010