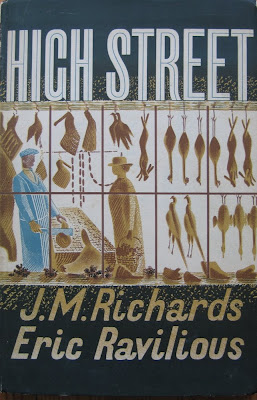 Arguably the most fashionable twentieth century English artist of the present day—more trendy than either Bacon or Freud, but appealing to a very different audience. Ravilious’ ascent to star status possibly began with the publication of Freda Constable’s The England of Eric Ravilious in 1982. Since then, a number of studies focussing on various aspects of his work have appeared, most notably Alan Powers Imagined Realities. The appeal for his admirers lies in his peculiar vision of England in peace and war, captured in intense wood engravings that take their inspiration from Blake and Bewick, in spirited lithographs that owe something to continental surrealism and English folk art, but more brilliantly still in pallid watercolours informed by the artist’s early training as a wood engraver, but taking their palette from the English tradition in watercolour and the decorative motifs of, among other things, late eighteenth century Wedgwood creamware. In this world planes and tanks are reduced to toy-like dimensions and people, where they are present at all, become mere dolls --part of a play world of empty landscapes and interiors that exude a sense of dream-like menace. Ravilious, like his friend Edward Bawden, is the archetypal artist as designer- and- decorator and his work chimes in with the modern liking for irony and playfulness, and for interior design. His vision is the classical counterpoint to the sturm und drang romanticism of his exact contemporary, John Piper. 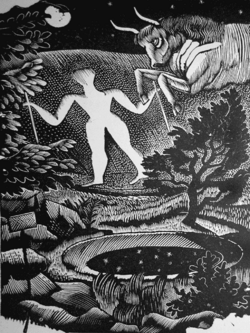 But unlike both Bawden and Piper, Ravilious died before he could fulfil his true potential. An aviator lost at sea at just 39 in 1942 —he left behind designs that were used years later, and now anything with a Ravilious motif on it is sought after —from the posthumous fifties meat plate, lemonade or milk jug by Wedgwood, the 1953 Coronation mug, to his four hundred plus wood engravings scattered around various publications. He it was who designed the logos of The Cornhill Magazine in 1929 and of Wisden, and a set of wood engravings for the Kynoch Press Notebook and Diary for 1933 that deserve comparison with those of William Blake. His most famous book is High Street, which the Curwen Press printed for Country Life in 1938. This collection of 24 brilliant and quirky lithographs of shop fronts and interiors mainly in London (including furrier, second-hand dealer, undertaker and oyster bar ) which accompanies a text by architectural historian J. M. Richards, has now become, without question, the most sought after English illustrated book of the twentieth century. Only two thousand copies were issued, but many of these have been broken up for their plates and thus copies in good condition are rare.

At ABE you can find perfect or near perfect ones at up to £3, 250. The book’s rarity is compounded by the fact that the original lithographic stones were destroyed during the blitz. But with demand for High Street so great, it was only a matter of time before some sort of reprint appeared and in 2008 Alan Powers ( who used to execute exquisite watercolours of shop fronts himself ) brought out a history of the book ,The Story of High Street . which attempts, among other things, to identify the shops featured. This limited edition itself has now become a collector’s item for those who cannot afford the original book. Copies now trade at $238 or more. 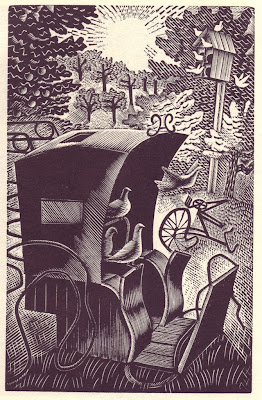 For Ravilious fans with lower horizons, issues of Wisden and the post-1929 Cornhill Magazine can easily be obtained for a pound or two. However, anyone wanting a copy of the very scarce Kynoch Press Notebook and Diary for 1933 will probably have to be content with the reprint published in 2003 by the Incline Press, copies of which can be had for £48, though the ‘deluxe ‘ issue is quoted at £280. [R.M.Healey]

Many thanks Robin. More trendy than Freud and Bacon, cooler than Koons and Emin - I hadn't realised. I used to see High Street round the bookfairs in the 1980s priced in the low hundreds and often a bit shaken. When it became a four figure book it disappeared and I had the odd email offering me a copy at over a £1000. Because of my curious need to make a profit I did not buy, but sadly I have never found a copy asleep. The highest auction record for the book is £1200 + premium for a copy at Winter in 2008, slightly chipped at spine. £3250 is what you have to put on it to stop it selling. Also desirable is his 1929 Almanack for Lanston Monotype Corporation (12 wood engravings) -a copy made £400 4 years ago. His Writings of Gilbert White of Selborne from Nonesuch in 1938 (44 woodcuts) can command £600 or more. Sellers sometimes claim it was his finest work; certainly It was his final great work before he met his death off Iceland in 1942.
Posted by Bookride at 4/06/2010

I believe that you can still get the Mainstone Press / Alan Powers reprinted limited ed (750 copies) from the LRB Bookshop for £160.

The most desireable of all Ravilious designs would be the jacket for Anthony Bertram's 'The Sword Falls' published by Allen & Unwin in 1929. None of the surviving copies are known to have retained their jackets and no record exists of the design.

A copy of this dustjacket has now come to light and will be shown in the new Mainstone Press book: Ravilious: Wood Engravings by James Russell - published October 2013.