Book Collections we would like to buy... 1. Karl Lagerfeld 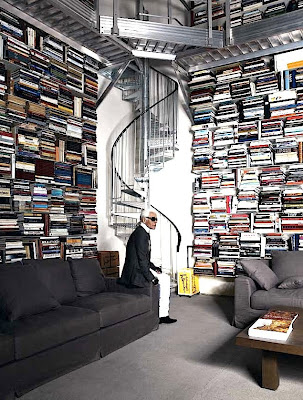 It is variously reported that the fashion designer Karl Lagerfeld has between 60,000 and 230,000 books--- mostly art books. At one point they were housed at his Paris studio but  the report below indicates that they have been boxed and moved to the West of France:

"Karl Lagerfeld is going underground — to find creative storage space for his sprawling 230,000 volume book collection. "It’s a big problem, no?" asks the passionate bibliophile, ever the master of understatement. His solution: a storage facility at his house in Biarritz — underneath the tennis court. The 20,000-square-foot, climate-controlled subterranean complex will also include a photo studio, but the centerpiece of the project is a 10,000-square-foot, 20-foot high space where he plans to erect a library. What’s next, the return of the sexy librarian at Chanel?"

Last week a report on him from The Observer  turned up in Private Eye's witty Pseud's Corner column ('When his desk gets a bit messy, he buys a new one. He matches his gloves to the colour of the French daily sky...').

The interesting revelation in the Eye piece was that when Karl reads a paperback, he rips out the pages as he goes. Possibly he read the last page of A La Recheche de Temps Perdu as a single sheet before binning it with the other two thousand pages. Gianni Versace appears to have made his way through Proust without ripping a single page out. One could conclude from this that Karl's library will be mostly hardbacks. He has 350,000 followers on Twitter but follows no-one. In an industry not noted for selflessness he is the supreme solipsist. His observations on Twitter are not without merit, mostly sub-Wildean apercus - 'Throwing money out the window brings money back in through the front door…Don't look to the approval of others for your mental stability…My greatest problem in life is my indifference to the outside world...the most important piece of furniture in a house is the garbage can."

We have bought very large 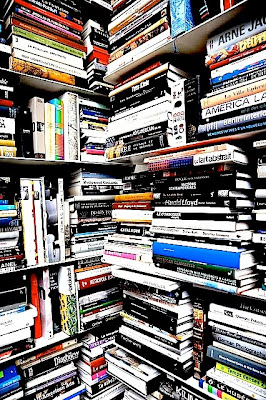 collections of art books -we cleared the Highgate mansion of Thames and Hudson founder Eva Neurath and the Earls Court flat of the art critic Mario Amaya but have had nothing on the scale of the Lagerfeld library. Few things sell as well as art books if you get the price right. Art books are often very heavy and many of these are of surprisingly low value, but quite frequently an unexceptional looking tome proves valuable. In a modest art book collection bought at auction last month we found the difficult T & H art monograph Francis Bacon by Ronald Alley and De Faucigny-Lucinge's fabulous coffee table book Legendary Parties (Vendome Press 1987) - together they will give little change from a $1000 bill. Several of Lagerfeld's own books are in the $100 class including his two Steidl photobook titles from the late 90s Casa Malaparte and The House in the Trees. He also produced issue 23 for the de luxe fashion victim magazine Visionaire (NY 1997) The Emperor's New Clothes. This appeared in a wooden box in 5000 only copies and is a portfolio of celebrity nudes shot by him of Rupert Everett, Demi Moore, Julie Delpy, Minnie Driver, Lisa Marie Presley, Amber Valetta, Linda Evangelista, Alex Lundqvist, Karen Elson etc.,. This can go for £300+ unless the box is damaged (it often is.)

He shelves his books sideways (as shown) which mimics the piles of art books one sees on tables in interior design magazines. It is a flashier way of showing books but hell when you want to get one out from the bottom of the stack. Last word on books from Karl “I’m mad for books…It is a disease I won’t recover from. They are the tragedy of my life. I want to learn about everything. I want to know everything, but I’m not an intellectual, and I don’t like their company. I’m the most superficial man on Earth.” Karl -when you tire of them utterly email us and we will show up with a dozen strong men and women in a Volvo semi truck and trailer, with 10,000 flat boxes and at least a 100 rolls of tape. 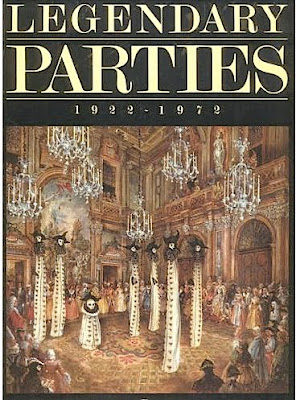 He looks so lonely in his library like a stuffed dummy from Mozart's time. I treasure my shoes from him.

I love that first pic - a spiral headcase.

Legendary Parties: I remember seeing it remaindered here in Australia (a dumping ground for remainder stock).

Those pics of his stacked volumes are delightfully finessed by the b/w Farringdon Road (?) rummage.

WHo is interested in buying The Emperors New Clothes designed by Karl Lagerfeld and for how much does it sell?
thanks