The Collected Emails of Stieg Larsson 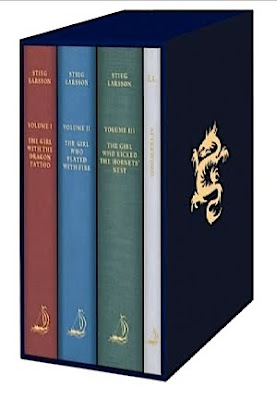 In the next few weeks Maclehose is publishing a four volume boxed set of Stieg Larsson's The Millennium Trilogy. It has the three books and a further slimmer volume entitled Afterword. Stieg Larsson: Four Essays and an Exchange of Emails. It should sell well at £69.99 for the box (Amazon have it at £39.89 with a publishing date of 28/ 10/ 10.) Having seen a review copy of the fourth volume I can report that it is a handsome slim mauve book, issued sans jacket and with a gilt dragon on the cover and with attractive endpapers showing a map of Stockholm. The emails between Stieg and his agent Eva Gedin at his Swedish publisher Norstedt show that the books were very well received by them and there is even an extract from their reader's report on 'Stieg L.3' as the third book was known in vitro--'unputdownable' 'almost unbelievable ability' 'stayed in bed three days reading it…' It is heartening to know that the writer got such encouraging feedback before he died so suddenly, never seeing any of the trilogy published.

Doubtless there will be books of collected emails of writers in future - The Selected Emails of Ian McEwan etc., . Salman Rushdie's archive at Emory University in Atlanta, Georgia has all his old computers and every time he upgrades they come and take the old one away. I remember when faxes were the thing, people wondered whether you would get books of collected faxes. These technologies are hell for the collector of autograph letters. Faxes are ugly, unsigned and they fade. When we bought a load of books from V.S. Naipaul all the arrangements with him were made by fax. I don't believe they have any real value and I can no longer find them anyway. At the time it crossed my mind to ask him to sign them when we met but it seemed slightly tacky and in a book buy you don't want to start on the wrong foot…(to be continued with an update on Stieg Larsson's current values…)
Posted by Bookride at 10/11/2010

Nigel:
I had a lengthy correspondence with both Rodney Wingfield (the Frost books) and Minette Walters over a number of years. All done by fax. I tucked away the shiny sheets in the author correspondence files rammed with hand-written letters, Christmas cards, postcards and the like. Sorting them out a few weeks ago I was dismayed to see that the fax sheets had all faded - so much so that they were now totally illegible.

With email and Facebook communication now the norm I would expect the typed or hand-written author correspondence to diminish to almost nothing over the next couple of years.

Thanks R P-M. My sympathies, it's a shame you could not have switched them to mail at some point...broken fax or something. I guess the reason I can't find my Naipaul faxes is they have faded to nothing. Emails must be just as bad if you had an email from Thomas Pynchon himself I doubt it would have any commercial value. Kudos, yes... N

I still have faxes from the early 90s from authors including several from a now highly collected author - they haven't worn well but are not utterly hopeless - we had quality machines. We did have an ink cartridge one once and I swear the faxes began to fade overnight.

Thanks Tom. I have printed out your comment and stuck it in Mason & Dixon--still can't sell it. Did Nabokov give you any signed books?--those I need. N