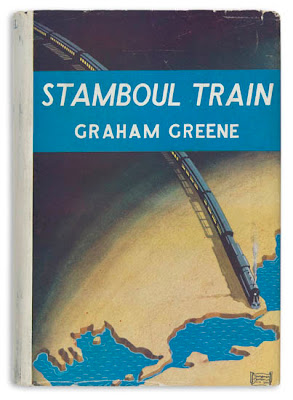 The first of a series of 'entertainments' by Graham Greene, the prominent writer of modern first editions. Not a scarce book even in a dust jacket but seldom seen in sharp condition. A very nice copy turned up last week at Gorringe's auction rooms in leafy Lewes, Sussex and made £4500 + their 22% (a somewhat greedy commission for a provincial auctioneer.) A thriller set on the Orient Express from Ostend to Stamboul, fraught with Greene's trademark style of unease and sleaze it deftly handles issues of racism, anti-semitism, lesbianism, communism , fidelity and faith. GG wrote of it in his introduction to the 1974 edition :

"In Stamboul Train for the first and last time in my life I deliberately set out to write a book to please, one which with luck might be made into a film. The devil looks after his own and I succeeded in both aims."

The movie Orient Express was probably not a roaring success, I can find no stills from it, no poster and no contemporary reviews.

There is a 'point' on the book that is seldom invoked. J.B. Priestley, at the time a much bigger fish than Greene, alleged that one of the characters, a writer called Q. C. Savory, was a defamatory representation of himself. On pages 77, 78, 82, 98, and 131 the name is changed to Quin Savory and for some reason 'Dickens' was changed to 'Chaucer.' This occurs at line 2, page 82 and is a quick way of determining precedence--if you have one that says 'Dickens' it's drinks all round. 13,000 copies had already been printed and bound, and altered pages had to be substituted. Priestley had seen a review copy when he demanded the changes, and so it is possible that a few copies without the alterations escaped. The only copy I can find is a proof copy on the web right now at $7500 (which includes an unjacketed modest copy of the 1932 first.) There have been over 50 copies in auction in the last 30 years and none have been the first state. Several have been presentation copies including one from 2000 that belies the idea that this was GG's first entertaiment-- the (later) inscription reads ''For Martin, from Graham Greene. Not yet an entertainment!''. A manuscript showed up in 1964 at Sotheby's and was bought by the legendary dealer El Dieff (Lew David Feldman) for $1820. It is decribed thus:

"The Autograph Manuscript, with revisions and deletions, c. 135 pp., written on loose sheets of ruled foolscap, contained in a cloth box, folio. The title-page carries two "possible titles" besides the one actually adopted, viz. The Orient Express (the title used for the American edition) and Snow on the Line. The title-page also bears a proposed but cancelled epigraph from George Eliot (the published book has an epigraph from George Santayana), and the note "Begun Jan 2. 1932". Before publication (at proof stage) the name of one of the characters in the book was modified and some other changes were introduced to avoid a threatened action for libel."

A fabulous investment by now probably worth 50 times the sum that Lew paid. The description tends to indicate that the name changes were made before the book was published so it is possible Priestley saw a proof copy.

OUTLOOK? The Lewes result was a sort of world record for the book even allowing for inflation and would indicate that Greene is on the move. Certainly there were lesser Greene's at the auction making much higher sums than they are currently available for on the web; ironically A Sense of Reality made £122, but can be bought at ABE for £45 fine in fine jacket. Results such as this could just be down to auction fever. The early books in illustrated jackets are likely to increase in value. Movies, TV series etc., could also push them up. Greene is unlikely to do a Galsworthy, but bear in mind there is a lot of it about and some early titles (eg The Man Within) are quite common even in super condition. A painfully optimistic Canadian dealer wants $11500 for his 'fresh' copy but another Man Within described as fine with a signed laid in card is available with a major dealer at $2500. The trouble with the book is that the jacket is not illustrated and it is surprisingly common for a book that was only printed in 2000 copies as a first. The seller does however point out that the title comes from Sir Thomas Browne - "There's another man within me that's angry with me."
Posted by Bookride at 10/30/2010

Thanks a lot, Nigel, another potential sleeper bites the dust! Seriously, though, I think it was QC Savory not QB, and a presentation copy of the first issue did turn up at auction 20-ish years ago, but the auctioneers did not know the issue point (ho ho). Even today it is worth checking in even the grandest emporia :) - regards, Angus.

Thanks Angus. I blame the guy with the proof online for the Q.B. I have changed it. I had suspected that copies may have gone through the rooms with the point undeclared or not noticed. Auctioneers are (thankfully) not the sharpest tools in the box. It is useful to hear that first state books exist because Sotheby's 1964 catalogue note seems to imply that the correction was made at proof stage. In the same sale were 5 other Greene manuscripts including The Power and the Glory which made $5600 and The Ministry of Fear which made $1820 the same as Stamboul. If a time machine was invented that was a sale to materialise in... N

Ooooh -this is one of those books I just wish I had hung on to. I bought it off the late John Ruston of Bournemouth back in the late 70's for about £50 (yes, it had the dustjacket). Gauche, young and eager I moved it on within 24 hours for £100 and thought I was the bee's knees!
Doh!

Peter Harrington have an "exceptional" copy "with the corrected text as usual" for £7500.

....Indeed. Thoroughly nice folk at PH, but they have to pay for those Chelsea rents and glossy catalogues...

Im bidding for this 1st
Fingers crossed
No ref: to second issue
But surely seller would know!