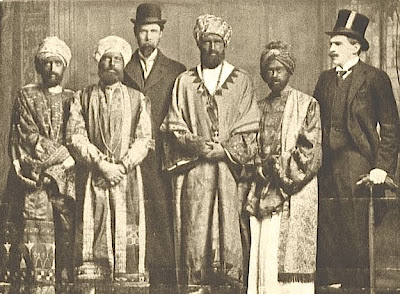 
MODERN FIRST EDITION / HUMOUR / SEDITION
Adrian Stephen's account of supreme prankster Horace de Vere Cole's elaborate hoax, in which he, Virginia Stephen (later Woolf), Guy Ridley, Anthony Buxton and Duncan Grant masqueraded as Abyssinian royals, with Adrian Stephen as their interpreter, and were treated to a tour of the Royal Navy's flagship HMS Dreadnought. Also known as the 'Bunga, Bunga' affair, it was de Vere Cole's finest and most successful prank. He had done a dry run in Cambridge as an undergraduate when he had posed as the Sultan of Zanzibar — who was visiting London at the time — to make an official visit to his own college accompanied by his friend Adrian Stephen (brother of Virginia Woolf). There had been a few hairy moments--at one point an elderly woman academic tried to talk to the Sultan in his native language. The resourceful Stephen informed her that in order to talk to him she would first have to join his harem. Language also proved a problem on board the Dreadnought. This is from Wallechinsky & Wallace's Hoaxes in History:

"Taken by launch from the harbor to the Dreadnought, Cole and his cohorts were received by Home Fleet Adm. Sir William May. After inspecting a marine guard, the party was taken on a tour of the ship, during which Herr Kauffmann explained the various sights to the wide-eyed Ethiopians. Unsure of what sort of dialect to use, Adrian Stephen suddenly began spouting passages of Vergil's Aeneid, mispronouncing it sufficiently to make it unrecognizable as Latin. Later, when he could remember no more Vergil, he switched to Homer, 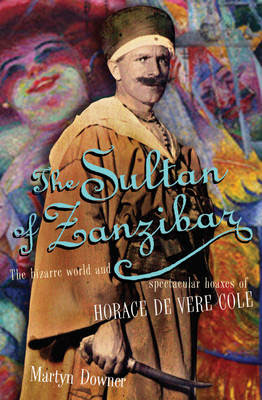 mispronouncing the Greek in the same manner he had altered the Latin.

For their parts, the four in blackface could not have responded more enthusiastically to all that they were shown. Although Virginia-fearful of being discovered a woman-limited her commentary to an occasional "chuck-a-choi, chuck-a-choi," the others let go with loud exclamations of "bunga, bunga" at everything from an electric light bulb to the ship's heaviest armaments. "

It was, for its time, a media sensation and small children would taunt sailors with cries of 'Bunga, Bunga.' De Vere Cole pulled off many other pranks, some violent, even criminal. One excellent wheeze was to hire four bald men to attend a particularly pretentious play with the letters S H I T written on their pates so that when they removed their hats the word could be clearly seen from the dress circle. Less pleasant hoaxes included wrestling the lifelike dummy of a naked woman on the pavement , banging her head and shouting 'ungrateful hussy' and standing in front of a moving train and lighting his cigar off the engine after it screeched to a halt. Dom Joly could only dream of such japes. He sold the throne of Croatia to a gullible 'mark' and is also said to have slept in a bed in the shop window of Maples. These and other hoaxes are recounted in an excellent recent biography by Martyn Downer - 'The Sultan of Zanzibar.' Continuing soon with book values, speculations on the Bloomsbury market (are the knockers moving in?) , a picture of the beautiful and beloved Mavis de Vere Cole Wheeler (if I can find one) and an olla podrida of trivia, gossip and whimsy... by the way that's Virginia Woolf with beard top left, Horace is said have attempted to 'ingratiate' himself with her but she regarded him as 'an intolerable bore...very rich and very vulgar...'
Posted by Bookride at 4/10/2010

About Cole's theatre ruse--I guess if these bald men changed their mind favourably about the play the one with an S on his pate could leave or put his hat back on. I'll get my coat.